Francis at the Holy Sepulchre : “That they may be one”

“Never let the day end without having first made peace” 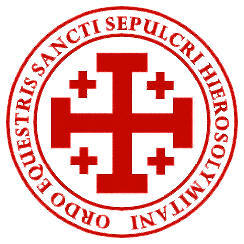 While actively preparing the pilgrimage of Pope Francis to Jordan (Amman), to the Palestinian Territories (Bethlehem) and to Israel (Jerusalem), the 30,000 members of the Equestrian Order of the Holy Sepulchre of Jerusalem, spread throughout the world, are in profound spiritual communion with about 235,000 faithful who form the small Latin rite Catholic community courageously present in this region where the Christian faith is rooted for a little over 2,000 years.The many Christian Churches in the Holy Land, will soon welcome the Holy Father Francis during his trip placed under the sign of unity, scheduled to take place from 24 to 26 May. Catholics of the Latin, Syrian, Armenian, Greek Melkite, Maronite rites… as well as the Orthodox of Ethiopian, Syrian, Coptic, Greek, Armenian rites… and also Lutherans and Episcopalians, all eagerly look forward to sharing this pilgrimage with the Bishop of Rome. He is scheduled to meet the Ecumenical Patriarch of Constantinople Bartholomew 1 at the Holy Sepulchre in the presence of all the Heads of Christian Churches, notably the Greek Orthodox Patriarch Theophilus III and the Patriarch of the Orthodox Armenian Apostolic Church Nourhan Manougian. According to historians this is the most significant event in this context since the time of Constantine and the Ecumenical Council of Nicaea in 325.

The Grand Prior of the Equestrian Order of the Holy Sepulchre of Jerusalem, the Latin Patriarch of Jerusalem Fouad Twal, has the honour of guiding the Pope during these very ecumenical days, which have been prepared in particular by the fervent prayer of students in Catholic schools of the Patriarchate, open to Christians of various churches and to members of other religions. Father Faysal Hijazen , General Director of the schools of the Latin Patriarchate of Jerusalem in Palestine and Israel, had underlined last January, with students, teachers and parents, the importance of this preparatory prayer to bring to fruition the testament of Jesus : `That all may be one` (John 17:21). These words were also inspirational in the choice of the motto of the papal visit in March by the Catholic Ordinaries of the Holy Land gathered in Tiberias. The motto, `That they may be one` , is accompanied by a logo representing the embrace of St. Peter and St. Andrew, the first two disciples of Jesus who respectively became head of the Church of Rome and head of the Church of Constantinople.

Fifty years after the prophetic meeting of Pope Paul VI and Patriarch Athenagoras of Constantinople 1 in 1964, which was marked by the lifting of the mutual excommunications dating from the schism of 1054, the movement towards Christian unity shown by the pilgrimage of Francis – in the footsteps of John Paul II (2000) and Benedict XVI (2009) – will be a message of reconciliation between the East and the West more broadly addressed to all mankind. At the regional level there will be, no doubt, political repercussions, since if Christians are more united they can better resist persecution, their enemies having for too long been known to exacerbate their divisions to exercise power over them since the conquest of Jerusalem by Saladin …
Approximately 4,000 journalists will be covering the event, the global repercussions of which can already be described as historic.

Summary of the programme of this pontifical pilgrimage:

Francis, having arrived in Amman during the day, meets the officials of the Kingdom, celebrates Mass at the international stadium, then visits the Syrian and Iraqi refugees, and young disabled people in Bethany, the traditional site of the Baptism of Jesus, on the banks of the Jordan.

Second day, Sunday 25 May, in Bethlehem, and in late afternoon at the Holy Sepulchre

Francis is welcomed at the presidential palace by the Palestinian Authorities in Bethlehem. He then celebrates Mass at Manger Square and meets children from refugee camps before departing for Jerusalem. An ecumenical prayer will take place in the Basilica of the Holy Sepulchre with the Patriarch of Constantinople and the Heads of all the Christian Churches.

Third day, Monday 26 May, in Jerusalem

Francis goes to the Wall of Lamentations, meets the Israeli President and Prime Minister, and then prays in silence at the foot of the Mount of Olives, before celebrating Mass at the Cenacle. He departs for Rome in early evening.

There is an international website dedicated to this pilgrimage : popefrancisholyland2014.lpj.org
You will find the prayer suggested for the intentions of this pilgrimage on the website : terrasanctapax.org